1981 – The Rifle Assoc of NSW changed its objectives to cater for the changes it could see looming in the defence establishment. The new objectives were stated as: ‘To encourage members of the Defence Forces of the Colony to become proficient in the use of the weapons with which they are armed, and to promote Rifle Shooting throughout the Colony.’ 182 Rifle clubs and new ‘district unions’ began to expand in number throughout the colony, especially ‘regimental rifle clubs’ based on the remaining Volunteer and the new Militia units, which allowed members to participate in the rifle association matches as individuals when they were not firing in service matches on behalf of their units.

1889 – The NSW Government reorganised the military forces into a Permanent Force, Volunteer Forces and Infantry Reserves. The Infantry Reserves were formed into Four Districts – Metropolitan,Western, Southern and Northern Districts.

The Northern district Headquarters was at Newcastle under Lt Col Alexander Wilkinson. Each district was formed into ten companies.

1899  -West Wallsend Club was formed 12th July 1899 as ‘E Company 4th Infantry Regiment Wallsend. Each company was under the command of a Captain. The enrolled members were recognised as ‘Reservists’ (partially paid ) and obtained ammunition and rifles from the Military.

A Rifle Range was constructed on land at West Wallsend behind Johnson’s Soccer Ground on land belonging to Caladonian Collieries with the Butts being made of timber and packed earth.

1903 – The Defence of Australia came under the new Defence Act. The Newcastle Headquarters was still ‘A’ Company 4th Infantry regiment now under Lt Col C M Ranclaud VD. With the Forces coming under the the new act Newcastle became the 6th Infantry Regiment- Australian Rifles commanded by Major G I Michaelis.

1915 – With the outbreak of World War 1 in 1914  significant changes occurred and  West Wallsend became ‘A’ Company of the 35th Battalion..(Newcastles Own)

The Club earlier Lapel/coat badges were brown over green. This was the 35th Battalion colours.

Their Motto ” Loyal and Ready”

During this time West Wallsend had a Drill Hall at the corner of Wallace and Hydnes Street and later at Withers and Short Streets. The Battalion paraded at Gregory Park for Drill and at the Rifle Range from 9.00am till 1.00pm on Saturdays using .303″ Lee Enfield rifles and .303 Lewis machine guns. At the end of the compulsory system it reverted back to a voluntary system. 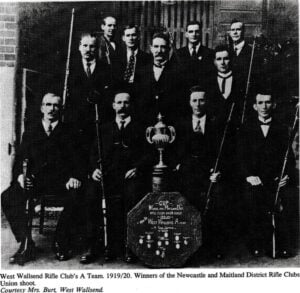 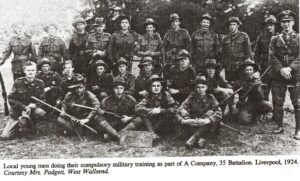 RIFLE SHOOTING MILITARY COMPETITION : The Lismore cadets are again at the top in the October shoot for the Burnage Cup. This is the third win for the Lismore Team and are now well in the lead, their total to date being 518. The second team on the list is Area 35A, West Wallsend with a total of 359.The results for October are as follows :

West Wallsend Rifle Club has adopted the single arm sling, members used it last Saturday with good results. The Club will compete from the 500 Yard range tommorrow in its yearly and quarterly competitions.

“The military authorities emphatic that the rifle range must not be used because of the danger to human life . The hill background was not sufficient to ensure catchment of an escaping bullet or ricochet off the mantle embankment”

1938 – A New Range was acquired on section 34 of the land belonging to a Coal Company (later Coal and Allied). It again had butts of earth and timber and was built by Lake Macquarie Shire Council using “Relief” Government Funding. Officially opened on 20th November 1938.

W Britton and R Lord are now level on 10 points as a result of the West Wallsend Rifle Clubs point score shoot on Saturday, Three Members A.H Torrence, T.A Johnson and L.Ruane are only one point less than leaders, with D Woodward and E Birmingham who have 8 points.

E Birmingham scored the first possible on the new range.

1940-1941 – Government demanded all Rifle Club activities must temporarily cease and ranges to close. The Rifles that were held by WWRC were either requisitioned or surrendered due to the shortage of arms for the military. Over 30,000 rifles from Reserves were sent to England after the losses in the evacuation of Dunkirk in 1940. 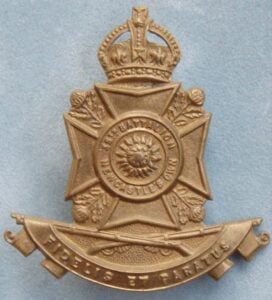 1942-1943 – Units of the Army were encamped at West Wallsend No 1 Colliery and Seaham No 2 Colliery they used the West Wallsend Range for training and the butts were concreted by the then wartime Public Work Department. The WWRC shot .22″ Rifles during this time to keep up the Club members skills whenever the range was available.

1945 – 1946 – At the end of World War 2 the Club again had access to the range and used down graded Lee Enfield .303″ rifles with ammunition supplied by Department of Defence. 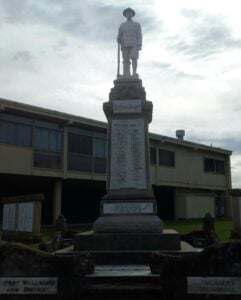 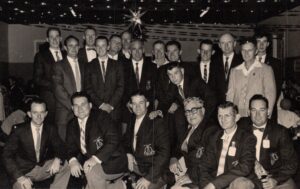 The WEST WALLSEND CLUB in their Blazers in 1960 Al Gray bottom Left, John Kirby second from right, Norm Mitten centre under the star. 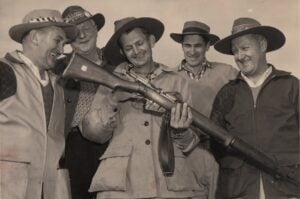 John Kirby After Winning West Wallsend Prize Shoot pictured with Ted Goodwin from the Westy Club. His prize was a Gold Tea Set. 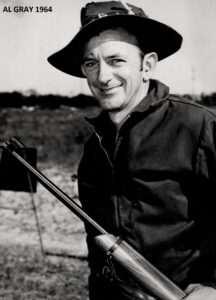 1965-66 Al Gray a great marksman and clubman from West Wallsend Club won the NSW Champion of Champion. The first for the Club to gain this prestigous award. To win this award you have to win the Club Championship then win the Hunter Valley DRA Championship and then win the NSW-DRA Championship. At the Presentation for the Champion of Champions. Al plus the club members from West Wallsend turned up in their Uniform which was a Green Blazer with green pants. The friendly Sydney crowd made plenty of banter and someone yelled out they look like a swarm of Grasshoppers. Since that day in in 1966 the Club has been known as “THE GRASSHOPPERS” 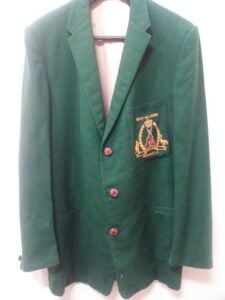 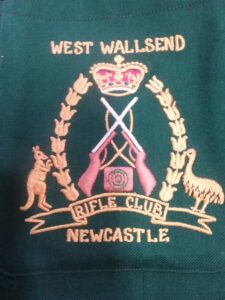 THE 1960’s GRASSHOPPER BLAZER and POCKET 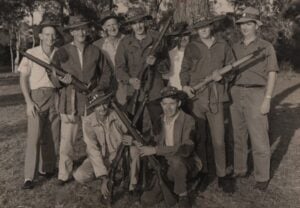 The West Wallsend Club always competed in the HVDRA Team Events held four times a year. One at each Range Cessnock West Wallsend ,Stockton and Greta Ranges. The No1 Team for West Wallsend was always called the Grasshoppers and contained the hottest marksmen for that period. The second team Kangaroos and third team Wallabies etc I even shot in a team called the Wombats. The top BHP Team were called “The Sandgropers”, Maitland were called “The Pickers”and Cessnock called the “Black Diamonds”.

During the 70’s and 80’s the West Wallsend Ladies Auxilary was formed. The Wife’s of the shooters decided to help with the running of the Club in many helpful areas….Margaret Kirby, Lyn McFarlane, Beth Kerr, Jill Kerr, Pat Waite, Joy Hicks and Vicki Matthews. These ladies work included :

1. Annual Prize Shoot and HVDRA Teams Matches at West Wallsend they would cater for Morning Tea, Lunch and Afternoon Tea.

2. Run numerous raffles during the year to raise money for prizes and equipment.

3. Provide meals after shooting had finished on Saturdays for those that wished to stay on and socialise.

4. Christmas time would be the Xmas BBQ and the ladies would have presents for the kids and lollies. A free day for all.

5. Some ladies helped the Committee members with paperwork and office work.

6. When the Club went to Prize Shoots for Example -Wingham everyone would camp together and take their families along and a BBQ would be held . The Children played together and this bought a strong family connection into Shooting. Friendships have endured over time and the siblings of the shooters have friends for life.

Unfortunately the Ladies Auxilary disbanded with the Range closure at West Wallsend and donated a sizeable Cheque from their account to the West Wallsend Rifle Club.

THANK YOU LADIES FROM EVERYONE

1980 THE LEGEND – AL GRAY has to give shooting away due to a bad back injury. Al Gray was presented with a Trophy from WWRC for winning the event more than 10 times. His achievments include :

Ian Thurlow will forever hold the Record as the only person to shoot a double possible at 900 Yards at West Wallsend Range.

1989 – With the possibility that Rifle Club Regulations would be revoked and the Club be put on the same footing as other sporting bodies. The Club was Incorporated on 10th September 1989 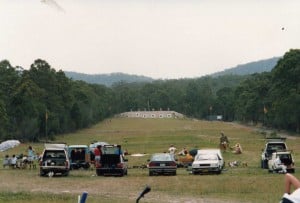 WEST WALLSEND RANGE late 80’s a picturesque six target range with mounds from 300 to 900 Yards. The Range was situated on Killingsworth Road south of  West Wallsend. The range faced east to west a typical country range surrounded by natural bush, the range faced towards the Wattagan Mountains with Mt Sugarloaf being right of this photo. On the southern side of 600 yard mound the Clubhouse and Caretakers hut was situated and down at the butts was a spacious target shed on the northern side of the range. A very social club with many a yarn told and many a beer being consumed during its Glory Days.

1990 – The Club moved its operations to Stockton Rifle Range and started to share a hut on the northern side of the range with its host the ANA Australian Natives Assoc. Many club members were lost during this move with extra travel expenses. Five Clubs used the Range and the Army and Airforce often used the range for marksmanship practice.

1994-95 Glenn Stevenson wins NSW Champion of Champion in Sydney. A young Glen was a great marksman during his shooting years.

1997 – The Department of Defence ammended the Defence Act of 1903 to revoke the Rifle Club Regulations from the Act. It was stated “For some time now rifle clubs and associations have had no military significance and it was no longer appropriate for the Defence Organisation to be involved in their establishment,administration and control.

The Department of Defence closed the Stockton Range as they wanted to sell the land. This has backfired and the land lies vacant as the whole area is contaminated with buried asbestos and old munitions and would take a fortune to clean up.

This saw West Wallsend Club have to move again to Cessnock Range.

1998 – West Wallsend Club moved to Cessnock Range. Many members again were lost to travel expenses. Not long after shooting at Cessnock began, the ANA club affiliated with West Wallsend as none of their members wished to travel.

1998 – By now the Team Matches in the Hunter Valley DRA Competition had finished as BHP could not get an A Grade Team and Cessnock wanted a composite team of TR and F Class Shooters. Therefore the West Wallsend Rifle Club gained permission to compete in the MDRA Sydney Grade Competition held 5 times a year at 300M,500M,600M,700M and 800M. During this period we were hosted by Sydney Rifle Club(The oldest Rifle Club in Australia). Our team was called The Grasshoppers an 8 man team with 7 counting scores. The reserves who traveled on the day often shot with the 2nd or 3rd Sydney Teams.

2000 – Only three Clubs remain in the Hunter Valley DRA and having only one Rifle Range.

2000 – The Forward thinking of Captain Rex Waite and his Committee gained permission from the MDRA ( Metropolitan District Rifle Association) to lease a Hut on Sydney Range the old Sunderland Hut in D Block to make it more comfortable for its travelling members for Sydney Team Grade Matches. 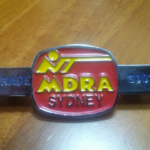 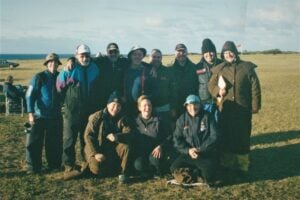 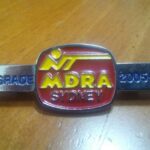 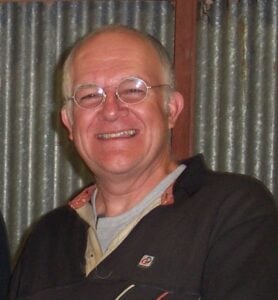 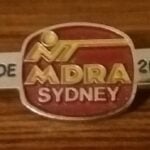 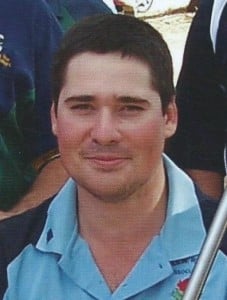 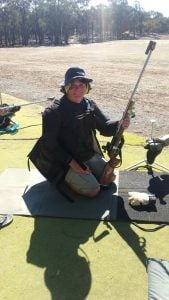 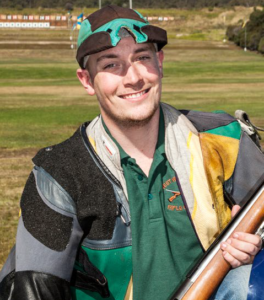 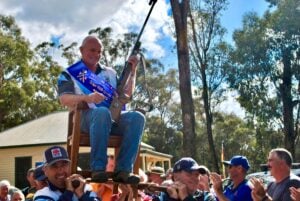